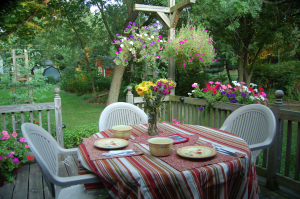 Now, there is really nothing wrong with Kosher Salt except for the fact there are two distinctly different types, and if you use the wrong kind you will really mess up your recipe.

When we so to St. Louis to visit Kevin, Katy and Evan we will almost always eat breakfast at a restaurant names First Watch. I had always thought it was a small local chain, but recently found out it is a relatively large US chain.

We love the breakfasts at First Watch. They are healthy, they use the freshest ingredients, and do a superb job of providing an alternative to the sugary, fat-laden breakfasts that are typical in most places.

We went there the last time we were in St. Louis and I was delighted to find out that they have published a cookbook, which I immediately purchased.

The next week, I mixed up some special First Watch seasoning from the cookbook and proceeded to use it to re-create their fabulous roasted potatoes. With great anticipation of the potatoes on my plate, I tasted them and found that they were so salty, they were inedible.

Terribly disappointed I checked my recipe against the book and determined that I had followed the book correctly. Was it a misprint? Did they print Tablespoons for the amount of salt when they really meant teaspoons? I assumed that there was a misprint and was planning on contacting the publisher, but as usual got sidetracked with all the other demands of life.

The problem is not in the salt, but the way we measure. If we measured by weight (grams), it wouldn’t matter which kind of salt you used. One gram of either would have the same saltiness. But, since we in the states typically measure by volume, (cups, tablespoons, teaspoons) we find that a tablespoon of Morton Kosher salt weighs almost twice as much as a tablespoon of Diamond Crystal Kosher Salt. This makes a good case for measuring by weight rather than volume and is especially important in things like pickling, canning and baking.

I am assuming that most recipes that specify Kosher Salt imply a light salt like Diamond Crystal Kosher salt because that seems to be what most chefs use. It is also better to err by using a less salty product like Diamond Crystal Kosher salt because you can always add more salt if the dish isn’t salty enough. If you oversalt, there is usually no easy fix.